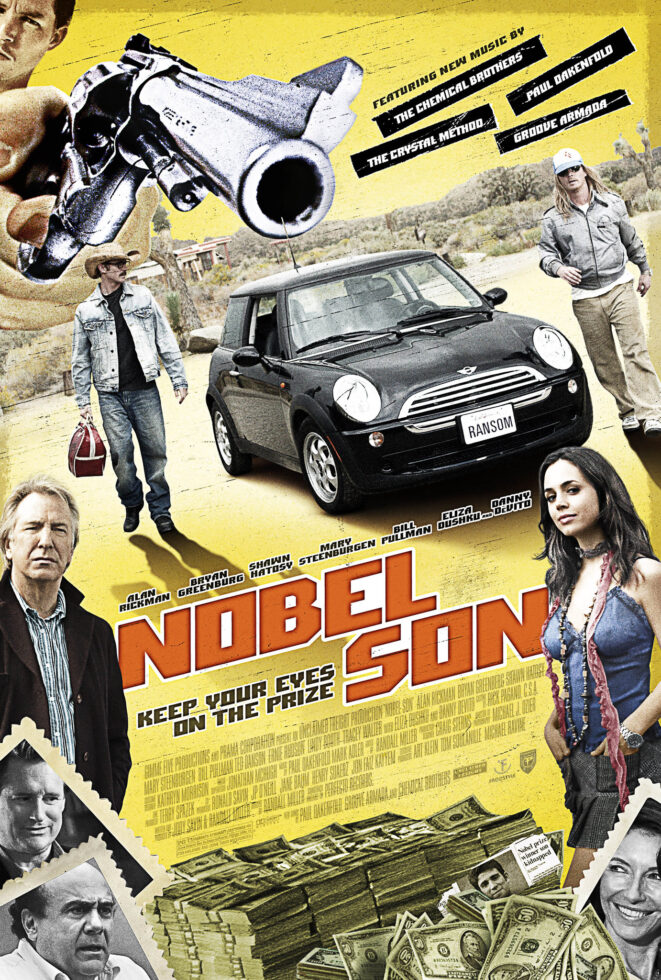 Nobel Son is a dysfunctional family film inside of a heist film. At times it over complicates itself by trying to have too many twists, an extremely elaborate chain of events, and highbrow conversations. The incredible cast never give us a chance to take this in to too much consideration. They work their magic and keep us glued to their every word, never knowing what they will do next. In the end, although there are flaws to be found, the motives of our characters and the message they produce with their actions is what leaves a lasting impression.

Eli Michaelson (Rickman) is a chemist and a college professor with an overpowering large ego. He only bothers making himself happy since that is the only person he cares about. He is cheating on his wife, Sarah (Steenburgen), with one of his students. He shows little affection towards this fling as the student is even in danger of failing his class. Sarah is a renowned forensic psychiatrist who sees right through her husband.

Eli and Sarah’s son, Barkley (Greenberg), is a struggling college student searching for the right PHD thesis in his studies of anthology, specifically on the subject of cannibalism. He has less than $3 in his bank account, but has to make do on what he’s got since his father refuses to help him out further. Barkley has always been a failure in his eyes since he didn’t follow his footsteps and proved to be the genius that Eli believes himself to be. As if Eli didn’t have enough to gloat about, he wins the Nobel prize for chemistry. Now more than ever, he soaks up the spotlight for all its worth. Everyone who knows him believes it couldn’t have happened to a worse person.

Barkley ducks out of his father’s speech about his winnings to go to a local poetry reading, where the dark and neurotic, City Hall (Dushku), is reading her poetry. Barkley is completely intoxicated by her and this ends up being his night. The next morning is the trouble though. Barkley ends up missing his plane to Stockholm where he was supposed to go with his parents. When he does get home, his parents are gone, but someone else is in the house. Barkley gets abducted and held for ransom, demanding $2 million dollars from his father.

Eli doesn’t take it seriously though, even when he talks to Barkley himself. As he is pleading for his father to save his life, Eli brushes it off and yells at him to catch the next plane as it will look poorly upon him if he doesn’t. To make sure that this is taken more seriously Barkley’s kidnapper, Thaddeus (Hatosy), insists on cutting his thumb off. Sure enough Barkley’s parents act differently about the situation when they receive a bloody thumb in the mail. Soon Barkley realizes that Thadius might be after more than the money or taking his father down. Even if Barkley gets out of there, this may just be the beginning of Thaddeus‘ plan.

The acting is brilliant, drawing you in more and more throughout every second of the film. Even though I like what the film did in the end, with lesser actors there is no question that I would have been less willing to look past some of the flaws, especially in the plot. Alan Rickman gives us a truly miserable man and with such slight effort makes us hate him and pity anyone and everyone who knows him, particularly his family. The more we get to know him the less we like him. From the beginning he seems terrible, but there is even more of a monster covered up. The only thing he seems to find any joy in is his pride, but further more everyone around him acknowledging the greatness that he believes is radiating from him. Rickman has a very understated way of portraying all of this and makes his character seem horrifyingly real.

Bryan Greenberg was great as Barkley, doing so many different things with the character at the appropriate times. He really frames the right tones throughout all of the twists and almost different stories within the one as everything keeps on changing so drastically. He stays true to his essential character and even through his great revelations, what initially drove him the most is brought to life. Greenberg really proved himself here as I would say this is the most difficult material that he has worked with and he did wonders with what he had. As the lead he sucked us in to the crazy world that his character lives in. The innocence that he projects from the beginning really makes him seem more of a victim and the tragedy seems all the worse.

Shawn Hotosy, Barkley’s kidnapper, has a similar role in the film except for all of his motives as they were shown in the beginning essentially get reversed. He has this scary intensity to being crazed yet in some way justified to seeming innocent, kind, and curious. The last case actually ends up being the most frightening. Through each stage Hotosy brings out the different elements of his character, showing how severely he has been affected and exposing the determination that lies within him.

Mary Steenburgen does wonders as Sarah, Barkley’s mother. Sarah has been in pain for years just by being married to Eli. Even if her happiness may be gone and passed she still attempts to protect her son with her life. When Eli turns away when Barkley gets kidnapped, this marks a turning point for Sarah as she doesn’t even seem to be in control of protecting her son anymore. Steenburgen shows this weakness within her character without losing herself. She gives us one of the easiest characters to sympathize with and even admire despite her weakness to have the strength to not let Eli beat her. She really puts forth the undying love of a mother even when something very different seems to be happening to her son.

Eliza Dushku played the wacky, extremely passionate, but clearly not completely right in the head, City Hall. Dushku and Greenberg have incredible chemistry, adding so much passion to their short lived relationship. Bill Pullman does well as the detective, trying to pin the kidnapping on Barkley himself. Danny DeVito was also pretty entertaining as the obsessive compulsive neighbor.

The plot I described above really is just an opening to the film that only scratches the surface. The film goes in a million different directions. In this it follows the panic and tension of a heist film, but it goes a bit overboard with this at times. It tries to make things too complex and risks losing its audience along the way. Luckily, the characters and incredible performances are so strong that we are able to look past this. Instead of having such a negative effect on us, we are able to just go with the crazy turns. It becomes like a roller coaster, it becomes a fun and entertaining ride.

Family is a huge subject of the film, from being stuck with one that poisons you to knowingly walking in to something like this and wanting it so desperately to fill a void in your life. Even though the execution isn’t perfect, Nobel Son has a gratifying pay off in the end. It shows us that everyone has a twisted side to them and it does this with the characters that may be the least expected to take this turn. They are also the ones in the most desperate need for a change in control. Nobel Son is a case of the powerful cast saving the film. The payoff was there in the end, giving us a film as likeable and entertaining as it is thrilling.