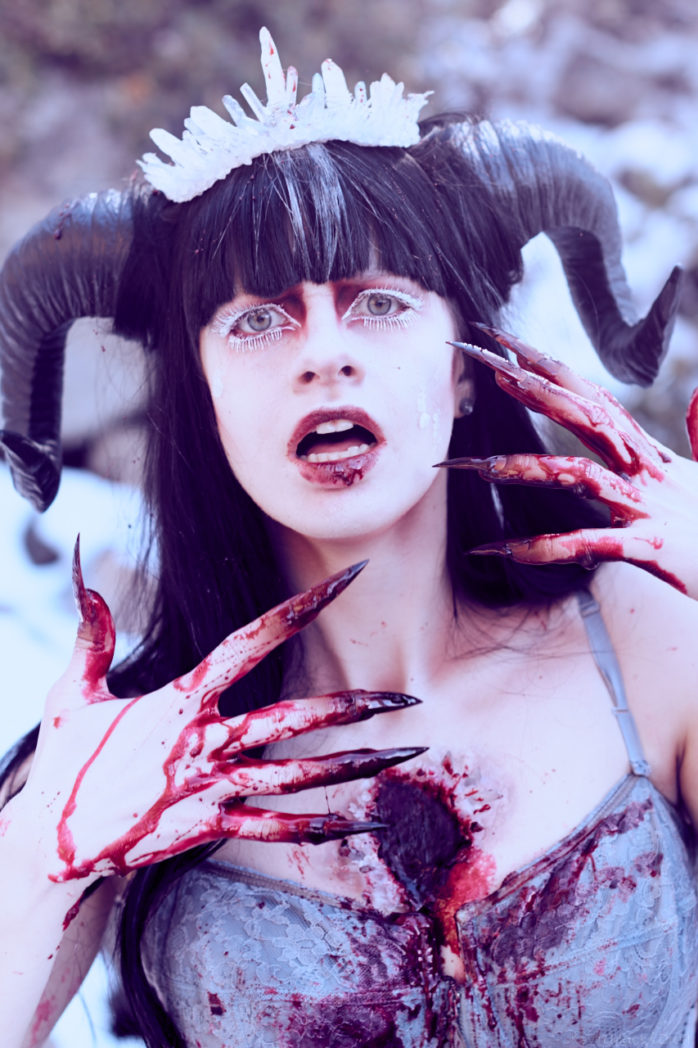 Part I: The Arrival

The foolish girl, wandering in to my lands so vulnerable, so intoxicating. She’s just asking to be taken over, to be manipulated at my will like a shiny, new toy. Doesn’t she know the darkness, the suffocation, killing all in its path- that is an integral part of winter, of the very essence of this cursed land- in me? Well, no matter, she is fair game now. Cold-hearted? Perhaps.  But most valuable lessons are. They say don’t play with fire, but nothing is more deceivingly deadly than the enchanting, biting cold. I’ll let her lose herself in her little childhood fantasy, let her be the Ice Queen. But I am the god, I am winter itself, an eternal winter at that. And I have just developed such a taste for destruction. I think she will join the woodland beasts in their time of hibernation, but neither her body or mind will sleep- only her free will.

I thought I wanted to escape, to succumb to the elements, to become one with nature, to this land that spoke to me, but I was so very wrong. I might be paying for my misjudgment for eternity for all I knew. Winter was a cold hearted bitch and I knew she was just getting started. She would twist and contort more than just my guilt, do more than pull my puppet strings to harm others. She would force me to become my own worst enemy, to rip my own beating heart out of my chest as my true spirit was utterly imprisoned, helpless to do anything against the monster she had made me. I didn’t know what the spell of this land would do, if it would torment me forever or simply take me out in one last swooping manipulation and leave a bloody carcass for her next vile monstrosity to devour.

Every ounce of pain I unleashed came surging back at me in tenfold. I felt it amplified over and over, including the gushing of my own heart out of my chest, the last chapter in my unforgiving nightmare.  I withered in pain of the worst kind, feeling the tortured echo in me that wouldn’t relent. Unless I fought through it. Could I? How much could I actually withstand and live to tell the tale? I had to try.

I was changed, never to be the same, the dried, crusty blood that coated my chest was a clear sign that I could be free though, and I held on to that thought. The horror might stay with my mind, but physically I wasn’t the cruel, carnivorous creature who slaughtered by the dozens. It didn’t have to be my entire reality anymore. It could be left in the past, where nightmares should all dissolve to. I might be a victim, but I was one with free will and a choice in what my story said from here.

I ran with unashamed fear and desperation. I didn’t care if Winter got the satisfaction of seeing me like this. I only cared about welcoming a new season, a new reality, a new chance to find myself and my rightful journey, far away from that suffocating chill that robbed me of my very self. I have bleed out and been reborn from that which should have killed me. It was time to shed my skin along with it and rise stronger, away from the brutal cold, never letting it touch my mind or spirit again. I realized I was of a new breed, a new spirit, and it a more relentless, fierce, enlightened one than even she could have anticipated. I didn’t seek revenge though, I only sought freedom and I felt it glistening on my new born skin.